In the aftermath of Gianluigi Buffon’s  likely final ever appearance in the UEFA Champions League, no superlative is too excessive to describe the Juventus legend, the greatest goalkeeper of all time, writes Ste McGovern.

In football lexicon, the word ‘genius’ might just be the most overused phrase of all. We often hear “that was a piece of genius skill” or “that goal was genius”, when such a term should be used as little as possible, reserved for only the finest moments from the finest players.

End Of An Era is another term that gets overplayed. Someone retires, “we’ll never see his like again, it’s an end of era.” A team loses a knockout tie, and it’s “that’s it, thanks for everything, bye forever”, even though it’s not always so clear cut. Eulogies were delivered on behalf of the Spain team after both the 2014 World Cup and Euro 2016, and yet they look like one of the top contenders at Russia next summer. Andres Iniesta, Sergio Busquets, Gerard Pique, Sergio Ramos and others from that glorious team are still present. So is the old era dead or is it still ongoing?

Listen to Episode 4 of Nostalgia Ultras podcast: The Milan Derby

For one man though it is less overstatement and more absolute. Buffon has been a staple of the sport, making it almost impossible to separate the position from the man. Strike up a conversation about goalkeeping with a mate and see how long it takes for the Italian shot-stopper’s name to come up. Not since Lev Yashin has someone come to define the position so comprehensively; he is the goalkeeper.

That much was evident last November when Italy drew 0-0 with Sweden at the San Siro in a playoff for the World Cup. Out of the 359 clean sheets he has amassed thus far, this must have been the worst one he has ever kept. There was the 0-0 versus AC Milan in the 2003 Champions League final that Juventus lost on penalties, but this loss cut deeper than perhaps any. The realisation that there would not only be no World Cup, but no more appearances for the Azzurri must have dawned on him at that moment. 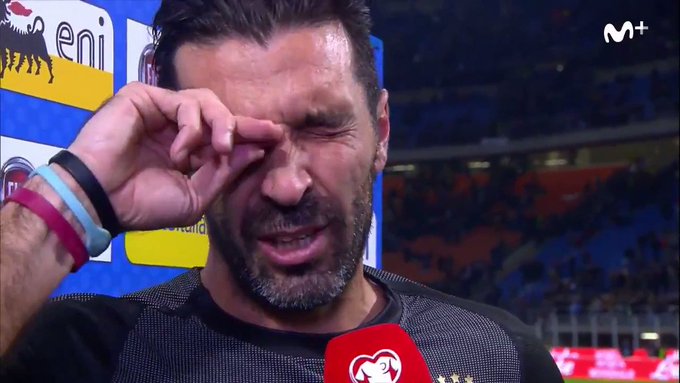 Afterwards there was a lot of talk about how bad this team had been over two legs and the poor decision making of their manager, Giampiero Ventura. But most of the conversation centred around Gigi and the tragic end to a glorious international career that included the greatest prize of all in 2006. He won’t get one last shot at winning it again, for which everyone mourned at full-time.

It was typical of the man that in such a painful moment Buffon’s first action after the match ended was to console his teammates, many of whom will get more opportunities at major tournaments, before congratulating the Swedes one by one. He embraced Martin Olsen, his opposite number, as he fought a losing battle to hold back the tears. It’s easy to be happy for the opposition when it’s, say, Ireland who has beaten you and it has no effect on your progression to the next round of the competition, but he’s shown grace and humility in the face of bad times too.

His reaction to the penalty awarded to Real Madrid in injury time, with the score delicately poised at 3-3 on aggregate, might say otherwise. The physical nature of his confrontation with Michael Oliver was over the top, but let’s not forget his clapping of the Swedish national anthem as Italian fans unceremoniously booed it. He exuded immense character on the night, an aspect of his personality that isn’t mentioned nearly enough.

Buffon commands respect from everyone on the pitch without demanding it. That much was evident in the Sweden game when even the referee gave him a hug. That level of respect has been well earned too; it’s hard to think of anyone who has matched their longevity with such incredibly consistency. The World Cup in Brazil appeared to be a nadir for the Italian legend, a poor overall performance that indicated a career finally on the slide. But the slide never arrived, and he seemed to be better than ever at times these past few seasons as he and his beloved Juve chased European glory.

Heading into the final stretch of the season, and thus the twilight of the great man’s club career, the spotlight refocused on Gigi’s mission to finally get his hands on the famous mouse ears. It would have been a fitting end, but instead it all finished in even more ignominious circumstances at the Bernabeu Stadium tonight. Possibly the greatest player to never lift the trophy, failing to win it should not define him as a player. If there was one footballer whose career was far greater than the contents of his trophy cabinet, then it’s Gianluigi Buffon.

In many ways, the past 12 or so months has been edging closer to the end of a very special era. Daniele De Rossi and Andrea Barzagli have retired from international duty. Giorgio Chiellini might not be far behind. Last May Francesco Totti played his last match. Andrea Pirlo did so too later that year. After giving us a lifetime of memories these incredible talents will be gone in a flash.

The era is ending, but there’s still just enough time to appreciate it.

This is an updated version of an article written in 2017.

This site uses Akismet to reduce spam. Learn how your comment data is processed.